Sails.js is a web frameworkthat makes it easy to build custom, enterprise-grade Node.js apps. It is designed to resemble the MVC architecture from frameworks like Ruby on Rails, but with support for the more modern, data-oriented style of web app & API development. It's especially good for building realtime features like chat.

Since version 1.0, Sails supports awaitout of the box. This replaces nested callbacks (and the commensurate error handling) with simple, familiar usage:

Upgrading from an earlier version of Sails?

Available as of Node >=v7.9 and Sails >=v1.0, ES8's async/await enables dramatic improvements to the way developers build Node.js / Sails apps. It allows server-side JavaScript code to be written with the awaitkeyword, instead of lower-level (and more fragile) flow control mechanisms like nested callbacks and promise chains. It lets developers breathe easier by removing the burden of painstaking, manual error handling after every database query. And best of all, it means the end of "callback hell": the most common source of bugs and stability issues in real world Node.js / Sails applications.

If ES8 isn't for you, don't worry-- Node callbacks and promise chaining are still fully supported. But for most teams, the transition to awaitresults in sizable gains in productivity, with fewer lines of code.

Upgrade guides for all major releases since 2013 are available on the Sails website under Upgrading. 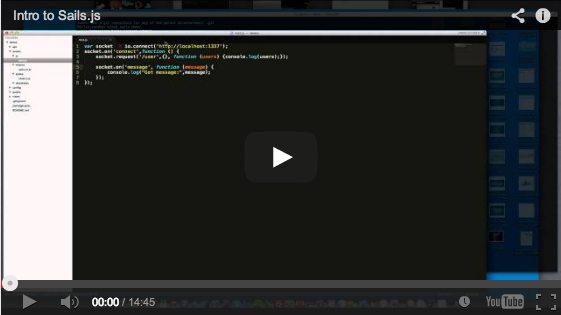 For the most up-to-date introduction to Sails, get started here.

Sails is built on Node.js, Express, and Socket.io.

Sails actionsare compatible with Connect middleware, so in most cases, you can paste code into Sails from an existing Express project and everything will work-- plus you'll be able to use WebSockets to talk to your API, and vice versa.

Need help or have a question?

There are many different ways you can contribute to Sails:

Sails is actively maintained with the help of many amazing contributors. Our core team consists of:

Our companydesigns/builds Node.js websites and apps for startups and enterprise customers. After building a few applications and taking them into production, we realized that the Node.js development landscape was very much still the Wild West. Over time, after trying lots of different methodologies, we decided to crystallize all of our best practices into this framework. Six years later, Sails is now one of the most widely-used web application frameworks in the world. I hope it saves you some time! :)

Sails is built around so many great open-source technologies that it would never have crossed our minds to keep it proprietary. We owe huge gratitude and props to Ryan Dahl (@ry), TJ Holowaychuk (@tj), Doug Wilson (@dougwilson) and Guillermo Rauch (@rauchg) for the work they've done, as well as the stewards of all the other open-source modules we use. Sails could never have been developed without your tremendous contributions to the JavaScript community.